Studies show that we feel the pain of loss twice as acutely as the pleasure of gain. Nowhere is this truer than in investing, and it shapes the way we invest. We have hundreds of conversations with clients every year, and we have seen this phenomenon consistently.

Markets have provided tremendous value and growth over time. One of the most famous investing books of all time is aptly titled The Triumph of the Optimists, but, during a downturn in the market, many investors have a hard time visualizing the next market rally. Logically and intellectually, we know the next rally is coming, and we know we need to be ready for it, but our emotions often betray our ability to maintain discipline.

As talk of a potential economic recession gathers steam, keep in mind that much of the widely forecasted economic weakness in 2023 is currently priced into markets. Instead of attempting to determine market direction over the next 6 months to a year, investors would be wise to ensure that their asset allocation is diversified, appropriate for their financial plan, and positioned to take advantage of areas of the market that are likely to enjoy relative outperformance over the next 3, 5 and 10 years.

Markets faced several challenges in 2022, including high inflation, historic central bank policy, the war in Ukraine, and Covid lockdowns in China. Inflation was a major factor in the markets throughout the year, with the headline consumer price index reaching a 40-year high of 9.1% in June. High inflation prompted the Federal Reserve and its global central bank peers to aggressively raise interest rates, which caused stocks and bonds to trade lower. There was no place to hide as central banks rapidly tightened monetary policy. Figure 1 shows the S&P 500 returned -19.4% in 2022, its worst annual return since 2008, and Figure 5 shows the Bloomberg U.S. Bond Aggregate produced its worst total return since 1976. This letter reviews the fourth quarter, recaps a difficult 2022, and discusses what the market will be focused on in 2023. 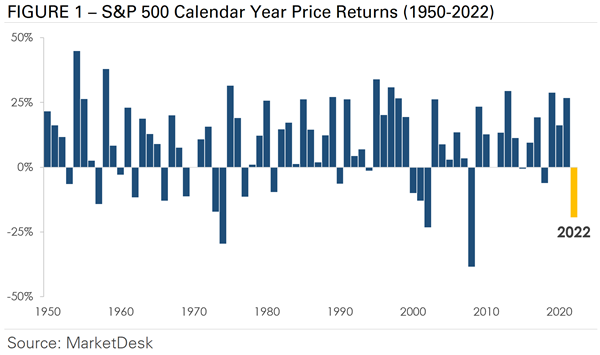 The main story of 2022 was the reversal of monetary policy from extraordinarily accommodative levels during the Covid-19 pandemic. Figure 2 shows the speed and size of interest rate increases as central banks worked to bring inflation under control. The chart tracks the cumulative percentage of interest rate increases and decreases by global central banks during rolling three-month periods since 1995. For example, the 68% at the end of November 2022 indicates that central banks across the globe raised interest rates by a total of 68% from September to November. In contrast, the total amount of interest rate cuts during that same period was only 4%. As the data shows, 2022 was the quickest, largest, and most imbalanced global tightening cycle since the late 1990s. 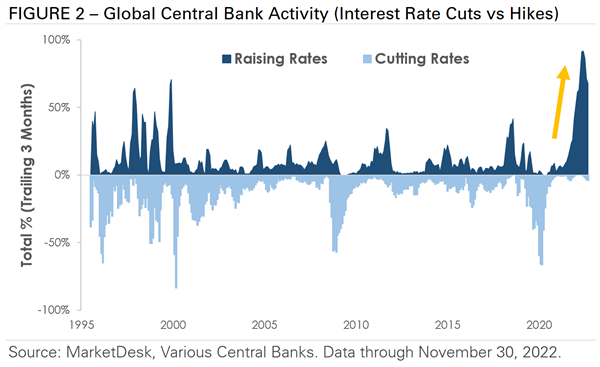 The pace of interest rate increases is forecasted to slow during 2023. Central banks continue to hint that they are approaching the end of their interest rate hike cycle, citing concerns that further tightening could push the economy into recession. In addition, data suggest price pressures are easing. While the year-over-year headline consumer price index rose by 7.1% in November 2022, which is still high compared to historical levels, it was down from the 9.1% rate seen in June 2022. As inflation and central bank policy return to normal, a new uncertainty is emerging – the unknown effects of 2022’s rate hikes.

The Federal Reserve's interest rate hikes occurred in 2022, but the full impact of its restrictive measures has not yet been fully felt in the real economy. While the U.S. economy contracted during the first half of 2022, it expanded at a robust +3.2% annualized pace during the third quarter. Consumer spending remained strong throughout most of 2022 despite high inflation, and the U.S. labor market added more than 4 million jobs through the end of November. The data indicates the U.S. economy has withstood tightening thus far, but the real test will come in 2023 as the cumulative impact of higher interest rates becomes clearer.

While a recession is not a foregone conclusion, it is possible the economy could be tested in 2023. An index of leading economic indicators shows the U.S. economy is already starting to slow as the impact of higher interest rates takes hold. Figure 3 graphs the month-over-month change in The Conference Board's Leading Economic Index, which tracks ten economic components that tend to precede changes in the overall economy. Included in the components are the average weekly hours worked by manufacturing workers, new home building permits, and the volume of new orders for capital goods, such as equipment, vehicles, and machinery. The chart reveals that the Leading Economic Index has decreased every month since March 2022, an indication the economy is slowing after a period of strong growth during the pandemic recovery. 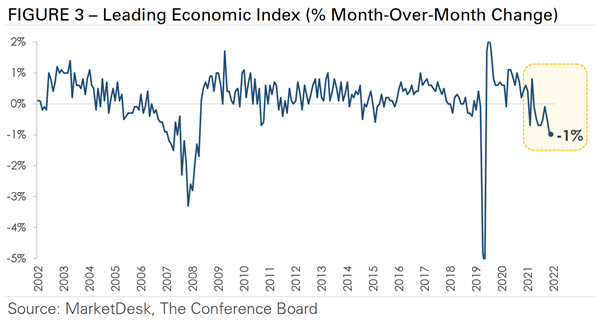 Equity Valuations Are More Attractive, But Corporate Earnings Are An Open Question

Whereas inflation and central bank policy were the primary drivers of markets in 2022, economic data and corporate fundamentals are expected to play a larger role in determining the market’s direction in 2023. Figure 4 tracks two important S&P 500 metrics. The top chart tracks the next 12-month price-to-earnings ratio, which divides the S&P 500’s projected next 12-month earnings by its current price. It shows valuation multiples expanded during the pandemic as interest rates were cut to nearly 0% before reversing lower during 2022 as rising interest rates weighed on company valuations.

While current valuations are at a more attractive starting point today than at the beginning of 2022, corporate earnings are an open question entering 2023 with the potential for an earnings reset as the economy slows. The bottom chart in Figure 4 tracks the S&P 500’s trailing 12-month earnings growth, showing the jump in corporate earnings during the pandemic. Despite expectations for an economic slowdown, Wall Street analysts still forecast single-digit earnings growth for the S&P 500 in 2023. The positive earnings growth forecast is encouraging, but it creates a risk for the market. If actual earnings growth falls short of the forecast, stock prices could decline as markets price in lower actual earnings. 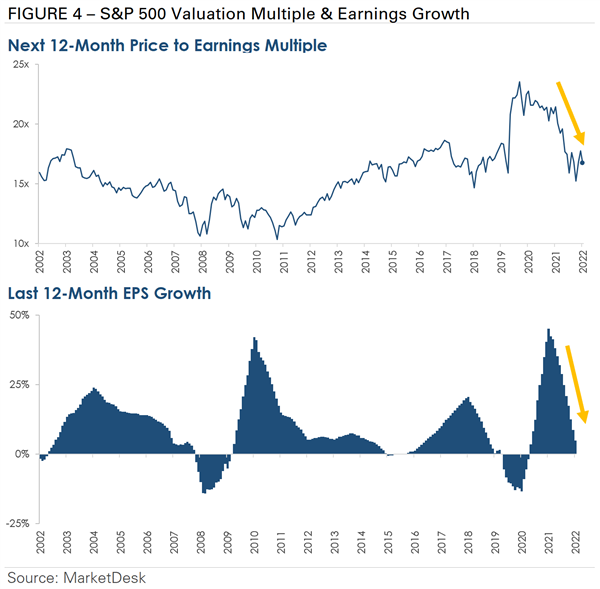 International stocks outperformed U.S. stocks during the fourth quarter. The MSCI EAFE Index of developed international market stocks returned +17.7% during the fourth quarter, while the MSCI Emerging Market Index returned +10.3%. A weaker U.S. dollar boosted the returns of international stocks, with U.S. dollar weakness driven by a shrinking monetary policy gap as other central banks catch up with the Federal Reserve’s aggressive policy. Separately, China’s decision to relax its Covid-zero restrictions raised the prospect of stronger global growth as one of the world’s biggest economies reopens.

The bond market experienced a significant resetting of interest rates during 2022, with yields steadily rising as the Federal Reserve pushed through large interest rate hikes. Despite posting positive returns during the fourth quarter, bonds produced significant losses during 2022 as central banks raised interest rates at a rapid pace. The top chart in Figure 5 shows the Bloomberg U.S. Bond Aggregate produced a -13% total return during 2022, its biggest negative total return since tracking began in 1976.

The bottom two charts in Figure 5 examine the current state of the credit market after 2022’s rate hikes. The middle chart shows the 10-year Treasury rate sits at its highest level since 2007. Rates are now higher across most credit classes, and investors can earn interest of around 4% to 5% on a portfolio of high-quality bonds, such as U.S. Treasury bonds and investment-grade corporate bonds, without locking up capital for long periods of time. In the corporate credit market, the bottom chart shows the high-yield corporate bond credit spread, which is the extra interest investors demand to loan to lower-quality borrowers, is in line with its median since 1999. 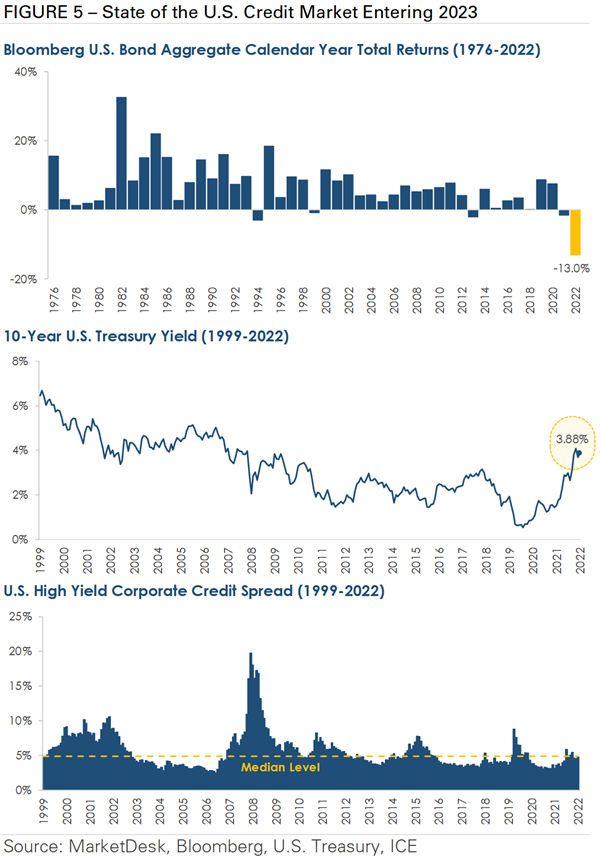 The starting point for bonds, both in terms of interest rates and credit spreads, is now more compelling than it has been in a long time. However, there is still the potential for continued volatility in the bond market. There is still significant uncertainty regarding how high the Fed will need to raise interest rates and how long it will need to keep interest rates at restrictive levels to bring inflation down to normal levels. There is a risk that inflation could remain above the Fed's 2% target, leading to an extended tightening cycle. At the same time, the economy is likely to start feeling the effects of 2022’s rate hikes in 2023, which could make bonds more attractive. The crosscurrents of uncertain central bank policy and a volatile global economy could keep interest rate volatility elevated and test bond investors’ nerves again during 2023.

2023 brings the next phase of the tightening cycle where the lagged effects of tighter monetary policy will be felt. It has the potential to be a year of two halves. In the first half, the focus is likely to shift from the number of future interest rate hikes to how much those interest rate hikes will slow the economy. Some data, such as the housing market, indicate that tighter monetary policy is being transmitted into the economy at a rapid pace. Home sales are slowing, and homebuilder confidence weakened every month during 2022 and now sits at its lowest level since 2012. At the same time, consumers continue to spend, and employers continue to add jobs. There is still a wide range of possible outcomes, and the unique nature of the pandemic followed by rapid interest rate cuts and hikes makes the path forward less certain.

The second half has the potential to be different depending on how severe the slowdown is in early 2023. Markets are based on forward-looking decisions, and investors will be watching closely for signs that the economy has bottomed and is recovering. Plus, Figure 1 contains an encouraging historical trend. The chart shows there have only been two instances of consecutive negative S&P 500 return years since 1950, in 1973-1974 and 2000-2002. This does not necessarily mean the S&P 500 will produce a positive return in 2023 or trade higher in a straight line from here, because it may not. However, it does provide helpful historical context in a volatile environment.

Wishing you and your family happiness and health in the New Year! We look forward to serving you another year. 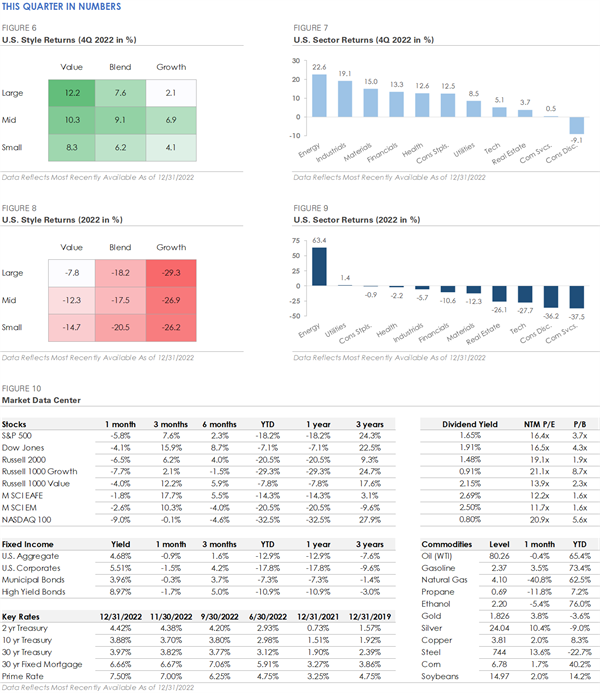