Baker Boyer Board Member Russ Colombo is one of four Walla Walla Public Schools alumni heralded this year for the district’s coveted Graduates of Distinction program. 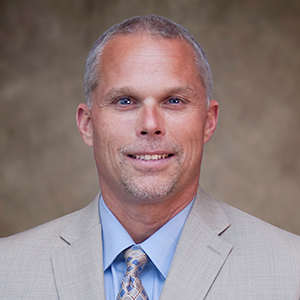 The award is the highest honor from the school district, which selects recipients who distinguish themselves in their communities and careers and bring honor to the district.

Honorees were feted Monday, June 6, at Walla Walla High School with a reception that gave the Graduates of Distinction a chance to share their stories and recognize those who helped shape their lives during their time in school.

Nominated by colleague Jodi Venneri, Colombo describes his high school years as a difficult time in which he was an introvert, scraping together credits as he struggled to find his place in the crowded halls. “When I say I barely graduated, I mean it,” he said.

But in the history class of the late Gustav “Gus” Siedler, the quiet student saw the world through the eyes of an American immigrant from Poland who served for the Allied Powers in the Polish-British and American armies during World War II, followed by service in Korea before a teaching career that led Siedler to Walla Walla High School from 1969 to 1984.

“He kind of sparked an interest in history for me,” Colombo said. “He was an inspiration. In a roundabout way, he made me aware — talking about his life — of how fortunate we are here in the U.S., having all the freedoms that we do.”

Colombo graduated in 1974. Four years later he joined Baker Boyer as a mail carrier/courier. In the more than 40 years that followed, he advanced through the ranks to Senior Vice President, Senior Credit Administrator, managing Baker Boyer’s $300 million credit portfolio.

He built a reputation as one of the Pacific Northwest’s most accomplished bankers, guided by deeply rooted values and an understanding of the economy. When bankers across the country made loans that resulted in home forfeitures and bankruptcies between 2005 and 2008, Colombo had “a loud voice in exposing the predatory nature of these loans,” said Baker Boyer Board Chair Megan Clubb in a letter of support for the nomination.

“It’s likely not obvious how much his advice and guidance has contributed to the health of our local economy,” Clubb wrote.

Letters of support for the nomination also came from businessmen Scott Abajian and Darin Harvey, who described him as a consummate professional who understands the driving forces behind business growth.

In addition to Colombo’s business knowledge and leadership, they lauded his commitment to service organizations and nonprofit work, including for the YMCA Youth Sustaining Fund, Lillie Rice Center, Walla Walla Community Hospice, Citizens for Schools and Walla Walla Community College Business Curriculum Advisory Board. He has also volunteered time with his wife, Susie, a Baker Boyer employee, with her charitable work for the Providence St. Mary Foundation Board.

Baker Boyer congratulates Colombo and appreciates and values his contributions as an employee and now as a Board Member.