On Tuesday, October 20, Baker Boyer employees will formally relocate to the new Baker Boyer Financial Center in Yakima. Baker Boyer has built this stunning new facility to meet the expanding needs of the Yakima Valley. It is located at 921 Seattle Slew Run, just up the hill from Baker Boyer’s current facility. The project broke ground in March 2019 and the opening was slightly pushed back due to COVID-19.

“The rooms and expansive views of the beautiful Yakima Valley are designed for meaningful and open conversations, so we can help understand people, help them set the course for their future and help them successfully navigate their financial journey," explained Mark Kajita, Baker Boyer President and CEO.

"Ultimately, we want to re-empower our clients throughout their financial and life journey, and the building was specifically designed to facilitate that process,” said Kajita.

“We are also excited to serve non-profits in the community by filling a need with our Community Room they can utilize.”

“Thanks to the strong support we’ve received from the community, its CPAs, attorneys, businesses, and other professionals, we have experienced nearly two decades of growth in the Yakima Valley. Our continued investment in the Yakima Region is a strong reflection of our optimism in the economy of Yakima. Our focus on local, personal relationships has also required us to increase our future staffing, and we have simply run out of space in our current building,” explained Kajita. “We anticipate adding several new hires in the first year of the new building’s opening. Additional staff will be added as we continue to grow in the future,” Kajita explained.

“As a show of our commitment and the importance of the Yakima Region in our overall long-term strategic plan, one of the members of the Board of Directors of Baker Boyer will personally be involved in the opening of the new building, strategic planning of Baker Boyer in the Yakima Region, and hiring of additional staff. I’m pleased to announce that Baker Boyer Board Member, Kip Kontos, has agreed to take on this important role,” elaborated Kajita. 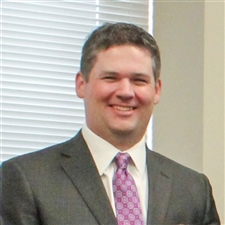 "Kip has been granted a 12-month leave of absence from his employer Alaska Airlines in order to assist the Bank at this time. As a Board member who has been involved in the strategic planning for the bank, including this expansion in Yakima, he immediately recognized the unique opportunity granted both he and the Bank,” stated Kajita.

“I’m excited to roll up my sleeves and focus full-time on Baker Boyer,” said Kontos with a smile. “As a great-great-great-grandson of company founder D.S. Baker, it’s truly an honor to have this opportunity to step away from Alaska Airlines for a year and discover how I can help extend the legacy of my family and this great financial institution here in Yakima.” Kontos will help solidify the growth strategy and staffing for the new Financial Center, including helping to identify and hire a permanent Yakima Regional Manager.

In addition to providing space to expand their D.S. Baker Advisor team in Yakima, the bank is excited about the new community conference space that non-profits, professionals, and others can utilize via the Community Room. 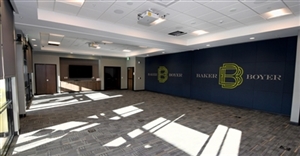 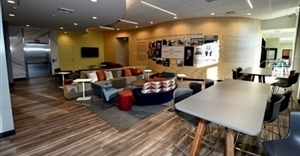 This means in addition to providing a state-of-the-art facility for Baker Boyer clients, the new location will allow community organizations to host events in this flexible meeting space. The Community Room will be big enough to hold medium-sized conferences, training, and events for up to 100 people.

Just as with Baker Boyer’s current location, the new building will initially be closed to the general public due to COVID-19. The building will be open by appointment to clients for safe deposit access and essential, socially-distanced in-person meetings. The Financial Center is slated for a grand opening sometime in 2021 when it has been determined safe to do so for clients and employees.

Kajita summed up, “This is an exciting opportunity to solidify Baker Boyer’s legacy for generations, and a continuation of our evolution to support and strengthen the Yakima community.”

About the Baker Boyer Financial Center in Yakima

The two-story building is approximately 19,000 square feet, with the cost of land and construction totaling nearly $10.5 million. The Financial Center will house offices for Baker Boyer advisors and staff, client meeting and conference rooms, and new IT backup & recovery space. It will also feature a large community conference space designed to serve the community, as well as Baker Boyer functions, with groups up to 100 people. This building will be the largest capital project since the construction of Baker Boyer’s seven-story headquarters in Walla Walla in 1911.

The General Contractor for the project was Yakima-based Tri-Ply Construction, LLC. The architect was Cory Trapp of Longwell+Trapp Architects and NewGround was the interior designer. Construction photography and drone video services provided by G-Force Aerial Media, LLC. Several local subcontractors and suppliers have also been involved in the project.

Finally, Baker Boyer AVP Lacey Braswell coordinated the project for the bank and did an amazing job keeping it on schedule and within budget. 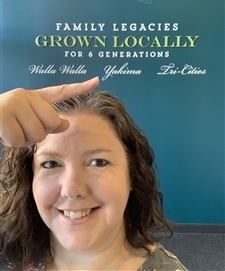 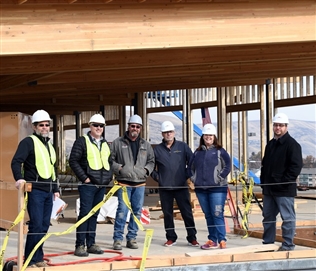 Clifford W. “Kip” Kontos was appointed to the Baker Boyer Bancorp Board of Directors in 2017. Kip is a sixth-generation descendent of D.S. Baker, the Bank’s co-founder and namesake. He grew up in Walla Walla, received his flight training from Big Bend Commercial Aviation Program in Moses Lake, Washington and completed his education at the Embry-Riddle Aeronautical University in Fort Carson, Colorado. When he was hired by Alaska Airlines, he was their youngest pilot. He continues to live in Walla Walla with his wife Jennifer (Wylie) Kontos, and their daughters.

For more about the new Financial Center in Yakima, please see: