With all the talk of renegotiating our trade deals with other countries, international trade is in the news. Few subjects are more nuanced, complex and confusing. 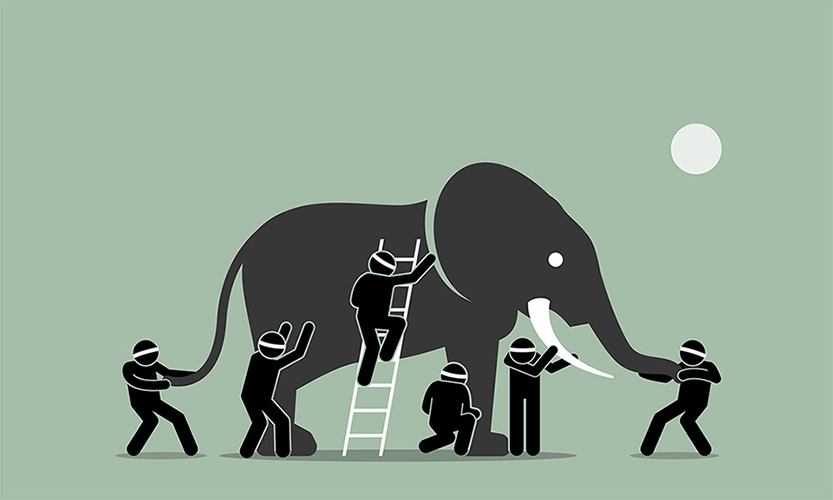 Many state their positions with a passion that is typically reserved for cilantro or their favorite sports team.

The subsequent noise is all too reminiscent of the parable of the blind men and the elephant. Most of us are familiar with the story, but it provides a wonderful way of understanding why the subject of international trade can be so politically and economically contentious. It is also instructive for all of us, as investors, to understand that we would be wise not to overreact to developments in the news around international trade.

The parable varies by country, but the basic story describes a group of blind men, all unfamiliar with elephants, standing stationary in a circle around an elephant, attempting to describe what it is. Each person touches only one part of the elephant. One feels the tusk, another touches an ear, and another the tail. Because the blind men’s descriptions of the elephant differ dramatically, they begin to regard each other as dishonest and, in some versions of the parable, come to blows.

This story is useful as we attempt to understand the complexities and the contentiousness of international trade. The reality is all of our experiences with international trade differ. The autoworker in Michigan is going to have a very different opinion than the iPhone engineer in California. The Eastern Washington apple grower or wheat farmer may have a very strong opinion about free and open trade, while the estate-planning attorney in Boston may have no opinion at all. Just as no single blind man captured the concept of the elephant in its entirety, no single experience with international trade is more valid than the other.

Only by combining the collective experience of all the blind men do we approach an accurate conceptualization of an elephant.

In part because there are so many varying viewpoints and strong emotions around trade, it is featured prominently as a subject for political debate. However, politicians rarely present the complexities of trade in a way that leads to informed debate. Instead, politicians wishing to incur favor with a particular group will tend to validate that group’s experience and make promises of solutions to the problems they face. In nearly all cases, the politician’s assessment of the situation—while part of the story—is oversimplified for political purposes.

It is, however, an odd time for all of this protectionist talk to be cropping up across the globe. Typically, we might expect talk of tariffs and other trade barriers to gain momentum during periods of economic malaise, when people are eager to place blame for their misfortune. But we are not in a malaise. In fact, we are in a period of coordinated expansion—a rare period where all major economies are growing at the same time. History suggests that we are in an economic period when of nationalists and talk of tariffs would ebb. Why, during this period of relative prosperity, would there be of erecting trade barriers?

When we consider the big picture (the whole elephant-ears, tail and all) and examine the data, we realize that technology and automation are a very significant factor in job loss, particularly in the manufacturing sector.

Job loss from the use of technology and automation is a global phenomenon, which helps explain the global reach of protectionist rhetoric. Is it possible that the global movement toward increased trade barriers is a solution to the wrong problem? We would answer in the affirmative, at least in part. Overseas low-wage workers have taken some manufacturing jobs from developed economy workers, but data suggests the majority of the manufacturing job loss was a result of technology and automation.

For investors, there are two very important things to remember. The first thing is that politicians can and do separate politics and economics. That which is politically expedient and popular with a target group may not be economically advantageous for the whole country. Is it possible that President Trump and his foreign policy advisors understand that threats of increased tariffs and other trade barriers are not in the long-term economic interest of our country, but will serve the short-term political interest of his administration?

If this is the case, it is reasonable to assume that international trade negotiations will continue to make headlines for the political benefit of the administration. Does that mean global trading systems will remain intact and continue to expand at the margins? We think so.

While slow, steady innovation in shipping modes and methods may be a more important source of growth in trade, it will likely get far fewer headlines than loud, blustery talk of trade deal renegotiation. Investors should be thoughtful about how they react to headlines about the next trade deal.

International trade is complex and constantly evolving. Generally speaking, there are gains from international trade and it is in our national interest to pursue trade, provided we can distribute the gains in such a way to ensure no one group bears the cost of trade alone.

Politicians and blind men will continue to volunteer their version of the truth regarding international trade and elephants, respectively.

However, reality will almost always be something more nuanced, more complex, and in the case of international trade, more resilient than it appears in official statements. As investors, we are wise to approach statements from the former and the latter with elephant-sized skepticism.