What will be the impact of this November’s elections on markets? This has been by far the most common question from our clients in the last few months. While the issues are increasingly complex in a globally connected world, the good news is we think the answer to the question is relatively simple. More on that in a moment.

Elections are binary events that are well telegraphed, much hyped, and the outcomes for which have the potential to shape fiscal policy for the next several years. Because of this, there tends to be a natural anxiety about them, especially in presidential election years. What’s interesting is that when you look at the data behind politics and markets there is a fairly clear conclusion to draw. You may assume that conclusion is that Republican-controlled government makes for a better return environment for businesses, and ultimately markets. If you do, you would be incorrect. And the opposite isn’t true either. The clear conclusion I mentioned is that for markets, election results don’t actually matter. Regardless of which political party controls congress or the white house, markets have marched higher. In fact, there is no statistical significance to market return patterns and any combination of political party makeup between congress and the president. This isn’t to say that elections don’t matter – they very much do matter to our everyday lives, just not to long-term investment results.

But how can that be? If the Republican Party has a reputation for being pro-business and the Democratic Party has a reputation for raising taxes to fund spending programs, how can it be that Republican-controlled government does not translate to better returns in markets? We think the most plausible explanation is that a distinction needs to be made between the government policies of a capitalistic society and capitalism itself. In other words, no matter what behavior government policy attempts to dictate, companies adjust and eventually find the most efficient ways to maximize their business. For this reason, while the perception of ‘Republican = good for markets’ and ‘Democrat = bad for markets’ will likely not change, the reality is that neither has a material impact over the long run. This isn’t opinion; it is supported by the data. Consider the following chart showing market movements during different presidential administrations:

Source: Dimensional Fund Advisors. Past performance is not a guarantee of future results. Indices are not available for direct investment. The S&P data is provided by Standard & Poor’s Index Services Group.

Part of what people are really asking is more of a short-term question. What are markets going to do if the winner is Clinton vs. Trump? The data shows the answer to that question is just as difficult to predict. Below you see market movements in two time periods, (1) from the day before the election to the day after (in the outlined circles) and (2) from the day before the election to a year later (in the solid circles). Blue represents years when Democrats were elected and red represents years when Republicans were elected. 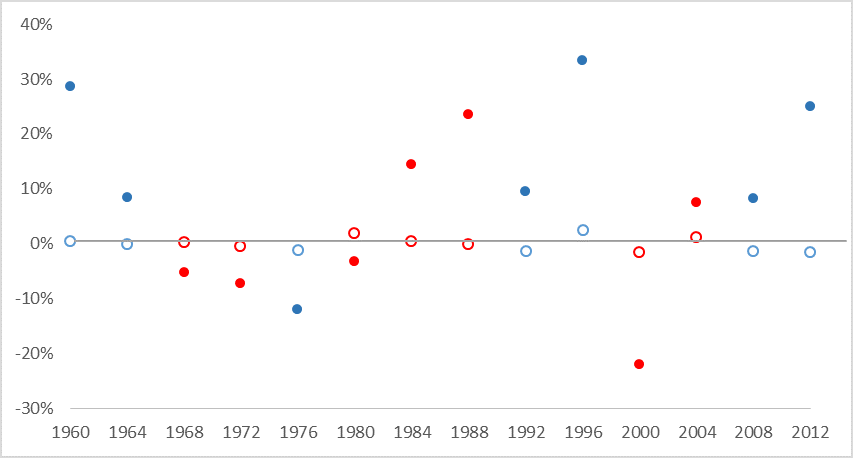 Sometimes markets moved nearly 2% from the day before to the day after, but more often it was 0% to 1% to the positive or negative. A year following elections markets moved to a much larger degree, both positive and negative, but neither with any statistical conclusion.

Here’s the most important thing we need to remember about markets. They respond to uncertainty. When there is increased uncertainty and the news is generally more negative, markets tend to suffer, at least in the short run. When the news is generally more positive, markets tend to rise. To the extent market participants expect a certain election result and that result materializes, the election ends up being less impactful to markets. In this election, based on all polling and betting organizations thus far, expectations are that Clinton will prevail. If that result materializes, we can reasonably expect it has already been priced-in to the markets and any disruption that does occur will be short-lived.

So what do we do about investment portfolios knowing what we know about elections and markets? If we could make accurate investment predictions given upcoming events like elections, we would do it, but markets prove time and again it is not sustainable to do so. Instead, the investment plans we create for clients have much more to do with unique circumstances like their income streams, spending habits, financial wishes and legacy plans. We help clients to make one decision – how much should we put into growth investments vs. stable investments? Then we manage the risks accordingly. And we do it this way because the research on the topic of market timing combined with our own extensive experience overwhelmingly proves that this approach gives clients the best odds for a successful long-term investment experience. And that success for our clients, quite simply, is the driving force behind every decision we make as an investment team. 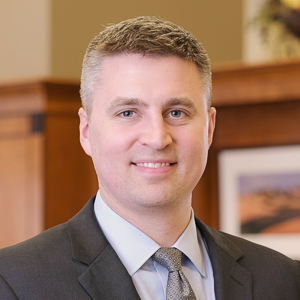