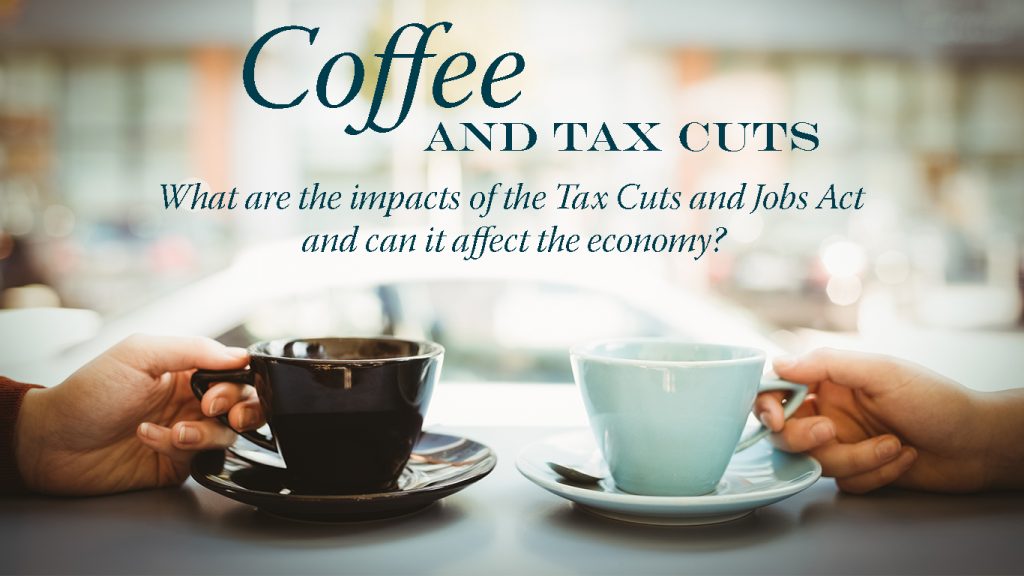 Over the last few years, I’ve taken up running. I enjoy it because I’m able to listen to podcasts and it keeps me healthy. I follow the same routine: I wake up, grab a cup of coffee, and take off on a run. The coffee doesn’t make me healthier – I wish it did – it’s just the catalyst that gets me going in the morning. It’s the harder part, the running consistently, that improves my health. As I consider the implementation of the Tax Cuts and Jobs Act, I start to think about how taxes have a similar relationship to the economy as a whole: a potential catalyst in the short term, but not a solution to long-term economic strength.

Before I get into the long-term impact of tax cuts on the economy as a whole, I want to be clear that the impact of the recent legislation will be sweeping and felt for years to come. There will be winners and losers under the TCJA, just as there have been in each previous tax reform, but overall it is in line with the Trump Administration’s “pro-business” agenda. Generally speaking, there will be a positive impact on corporate balance sheets, and that is already being reflected in markets, but there is still plenty of work to do in understanding exactly how it’s all going to work. For financial planners like me, it’s a bit of a relief to shift from speculating about what might change to the final law. I won’t spend time detailing out the changes, but I do want to provide some context around tax reform and what it impacts at a larger scale.

Historically, a tax cut is positioned as a way to help the economy grow, but it’s similar to drinking a cup of coffee before a run. It provides a short-term boost in energy, but it doesn’t necessarily cause the economy to grow as a whole.

Historically, a tax cut is positioned as a way to help the economy grow, but it’s similar to drinking a cup of coffee before a run. It provides a short-term boost in energy, but it doesn’t necessarily cause the economy to grow as a whole. For those of you who attended the Fall Baker Boyer Economic Update, you’ll remember the slides I presented that showed that the total tax collected as a percentage of Gross Domestic Product (GDP) has been around 19% for the last 65 years! That’s with several different tax cuts included and the top personal income tax rate ranging from 92% from 1952-1953 to 28% from 1988-1990. So how can that be? It’s because tax policy is incredibly complicated.

It’s complicated because the US tax code drives the behavior of individual actors in the economy. The analogy of the carrot and the stick motivating a horse is helpful when trying to understand the tax code. An example of a carrot that the government uses is the tax benefit that a person gets for saving money in a retirement account. If that person later withdraws the money from a retirement account before retirement there is likely the stick of a penalty. Both the carrot and the stick are driving people to save for retirement. Different taxpayers get used to these incentives and disincentives, so as time goes on they get harder to add or remove.

Most tax policy changes result in what I refer to as the “tax cut shuffle” because historically tax reform is more about deciding which taxpayers pay what percentage of total taxes. It’s essential to all of us as individuals and business owners because it impacts our behavior: it’s the cup of coffee that spurs different groups into action. However, the impact on the overall the economy is often negligible in the long run.

Now the next natural question is, “If government spending has been increasing and you’re saying total revenues have stayed flat, where does the extra money come from?” The answer is the national debt. Without spending changes, the interest on the national debt will continue to make up a larger part of the federal budget. Interest paid on that debt is money that otherwise could be spent on investments in education, infrastructure, and technology. Those things drive economic growth over the long-term. That leaves two options to get the national debt under control: raise taxes or reduce spending. If tax cuts are paired with larger spending cuts, then people will have more money to buy products and businesses will have more money to spend on providing those products.

Everything I just said seems to minimize the importance of tax cuts to the broader economy, but it shouldn’t be confused with the fact that tax cuts do impact us all individually.

Everything I just said seems to minimize the importance of tax cuts to the broader economy, but it shouldn’t be confused with the fact that tax cuts do impact us all individually. It’s a big part of my job to work with clients’ tax professionals to understand how the tax code affects them given their situation.

One of the things that everyone has some control over is their tax situation. Whether it’s thinking through how to save money for retirement or selling a business, there is tremendous value in being thoughtful before making financial decisions. Unfortunately, the details regarding taxes often are misunderstood and many end up paying more tax than they otherwise should. The hardest part is usually identifying those opportunities as personal situations and tax laws continuously change. A tax cut or a cup of coffee can be helpful to motivate specific behaviors, like running or saving for retirement. However, the long-term health of the economy and each of us individually has more to do with the creating better habits around spending and planning.

Newsletter Sign-up Be first in line to receive our newsletter right in your inbox.