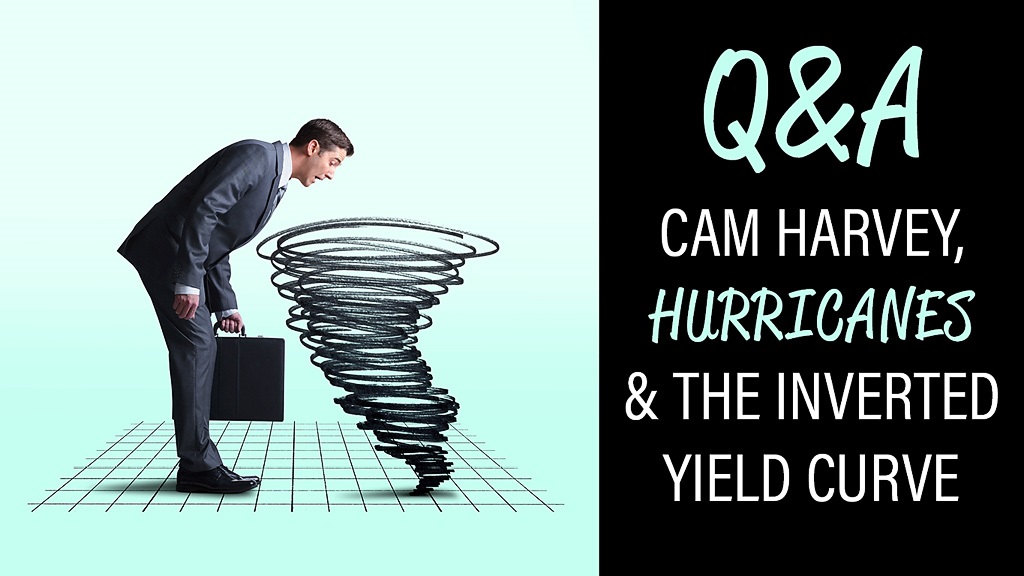 Kelly: So I’m hearing this lore about Cam Harvey and an inverted yield curve predicting a recession.

Kelly: I have a confession, I have never lost any sleep at night over a yield curve. How about a quick primer on yield curves.

John: Sure, but first it is important to note that there are lots of different yield curves, one for every kind of bond, but one reigns supreme the world over and that’s the U.S. Treasury bond yield curve.

Kelly: So when finance people say the yield curve, they mean the Treasury bond curve? 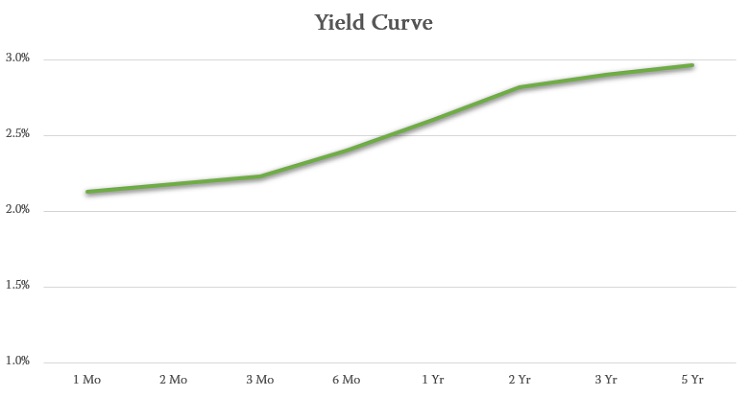 Kelly: Interesting. So the yield curve inverts when long-term rates are lower than short-term rates. Why would that happen? 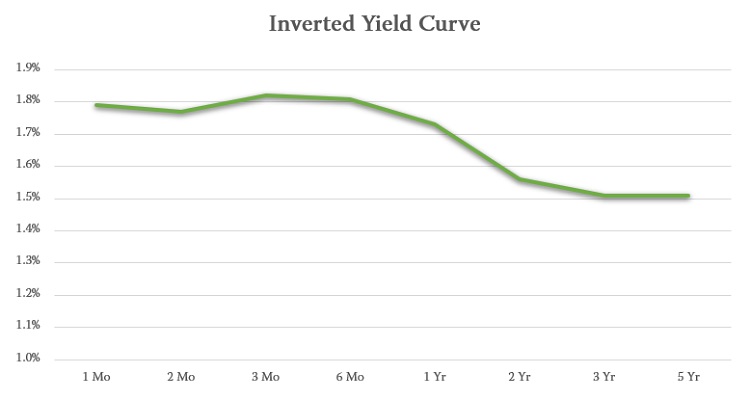 John: An inversion of the yield curve happens when people are willing to lock in a lower rate for a longer period of time because they’re particularly uncertain about the near future. If you thought a recession was coming—and typically with recessions people get nervous, they sell their stocks, they buy bonds, and it drives interest rates down—you might be willing to buy a 10-year bond knowing you can lock in this 10-year interest rate that could carry you through a period of market stress and uncertainty. When three years go by, and if we go into a period of very low rates, I don’t look so silly. Now, I am holding a bond that’s actually yielding higher than the prevailing interest rates and I may have done better than investors holding risky assets. So, the intuition is that an inverted yield curve means that people are nervous—they think something bad is coming.

Kelly: What does Cam Harvey add to the story?

John: Cam’s a Duke University professor, and back in the 80s he did his dissertation on the relationship between inverted yield curves and subsequent recessions. The question he was asking in his dissertation was, “does the fact that the yield curve inverts—does that typically forecast a recession?” And what he found in his research is that the answer is yes—during the last 7 yield curve inversions we have had 7 recessions. The bottom line is there was almost 100% consistency that an inversion is closely followed by a recession.

Kelly: What do you mean by closely followed?

Kelly: Has the yield curve inverted?

John: Yes, at the end of the second quarter we had a full quarter of inversion.

John: Right, the count has started. So now, everyone who is concerned about a looming recession, has one more thing that suggests that a recession might be coming.

Kelly: Thanks to Harvey.

John: Thanks to Harvey. Here’s the thing, in statistical terms, your degree of confidence grows as your data set grows. So if I can look at 4,000 years of history and I have 1,000 data points, then a really strong relationship is something that is quite convincing and all of a sudden I can make statements that are quite absolute. In Cam Harvey’s case, he has 7 data points. His dissertation committee said, “Okay Cam, this is interesting and not robust.” Planet Money did a broader study where they looked at all the yield curve inversions they could find globally—Cam just focused on the U.S—and they found 95 inversions. Fifty-some resulted in recessions.

John: A little weaker. The other really important thing is an inversion of the yield curve doesn’t tell us anything about the depth or length of a recession. And that’s really important because the technical definition of a recession is two consecutive quarters of negative growth. Well, you could have two consecutive quarters where growth was off by .5% and then have the other two quarters of that year be up 3%, and have what turned out to be a perfectly reasonable year of growth.

John: Right, I think because 2008 is so close in the rearview mirror, when people think recession they think 10% unemployment. Small business people think, “Oh my gosh, I’m going to have to lay off 10 people.” We recognize these images of enormous pain. And yet, a recession can be one where the stock market ends the year in good shape.

Kelly: What are the take-a-ways for investors?

John: If you hear someone say, “The yield curve is inverted and seven out of the last seven times the yield curve inverted we had a recession,” just remember to take that with a grain of salt.

Kelly: It’s a great headline, it sells papers, but—

John: Amazing headline, but remember if you have chosen a diversified mix of stable and risky assets that is right for you, then it should not alter the way you approach your investment portfolio.

Any major changes you make in your investment portfolio should not be driven by whether or not the yield curve is inverted.

First and foremost, it should have to do with you and where you are in your life. What is your investment time horizon? What is your tolerance for risk? Those are all things that come out of a financial plan, which is a really close look at you and your family, as well as your goals, hopes and desires for the future.

Kelly: As the Chief Investment Officer of Baker Boyer’s portfolio, are you taking any steps to prepare for a potential recession?

John: We’re going to be shifting portfolios at the margins recognizing the probability of future outcomes have shifted. We go into asset classes and look at what are areas—generally speaking—that are going to hold up better in a recession. Does that mean we’re putting all our eggs there? No. Remember we’re probability-based and broadly diversified.

Kelly: If you are probability-based, are there other indicators that impact your analysis?

Yes, it’s important to note that there are other indicators with recession-predicting track records that are as good—or better—than the inverted yield curve.

Sam: So you’re not the guy holding your econ textbook saying, “Look, this is exactly what is going to happen!”

John: Exactly. But, to the extent that a recession is more likely, our portfolios are going to increase those areas that will be more resilient in a recession. Colgate is not going to revolutionize the way you brush your teeth while Amazon might change the way you buy things, everything—that’s really exciting and Amazon’s a wonderful company! But, there’s a price at which you’re paying too much for Amazon’s future earnings. Whereas with Colgate, there’s a price at which their future earnings look very attractive. If we go into a recession, are you still going to brush your teeth? So, those earnings are beginning to look not only more reliable, but also pretty attractive relative to price. We are constantly tilting our broadly diversified portfolios to areas of market that give us a margin of safety—this is, we want to pay a lower price for the value we receive.

Kelly: What if readers want to take a deeper dive into yield curves?

John: I would encourage readers to keep an eye out for an article by Tyson Romanick. He does a great job of covering the nuts and bolts of the yield curve and what it means for investing.