Baker Boyer tapped the students of Lincoln High School in Walla Walla to collaborate with them on a showcase project to help commemorate the Bank’s Sesquicentennial: the creation of a marquee float in the Walla Walla Fair and Frontier Days Parade on August 31. It was such a success, all agreed to repurpose the float into a lighted holiday version for the December 7 Holiday Parade of Lights. Both floats received “Grand Champion” honors as the overall best in each parade. 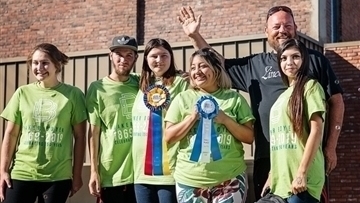 The collaboration with Lincoln High began in late 2018 when a committee of Baker Boyer employees began meeting to develop a few “signature events” for its upcoming 150th Anniversary year. As Events Coordinator Victoria Weeks recalls, “As the presenting sponsor for the Frontier Days Parade, we thought it would be great to “go big” with a float this year. We’ve admired the incredible work the Lincoln High students have done for many years in the holiday electric light parade, so we reached out the Jeremy (Gradwohl) and Marci (Knauft) to see if there would be interest in helping us out.”

“I knew the students would be honored and thrilled that Baker Boyer recognized their prior work on parade floats and entrusted them with this high-profile project,” said Gradwohl.

Fully funded by Baker Boyer, the float design, material selection, and construction have been completed by the Lincoln team of students, staff, and volunteers. Made primarily out of wood and painted canvas, the focal point of the float was a massive, triple-layer birthday cake that was over 13 feet tall and 15 feet wide. It was topped off with colorful four-foot tall birthday candles, a mirror ball, and an explosion of bubbles. The float also featured six-foot tall numbers celebrating the 150th anniversary of Baker Boyer along with a variety of design elements created to emphasize the relationship between Baker Boyer Bank and the local community. These design elements include: an operational replica of the “Rawhide Rail” train commissioned by Dr. Dorsey S. Baker in the late 1800s, columns reminiscent of the iconic Baker Building, and hand-painted art depicting mid-19th century Walla Walla and a sampling of agricultural products that symbolize the Walla Walla Valley. The 48-foot flatbed trailer on which the float is being built was donated by Dick and Darin Harvey of Mountain Hi Truck and Equipment in Walla Walla. 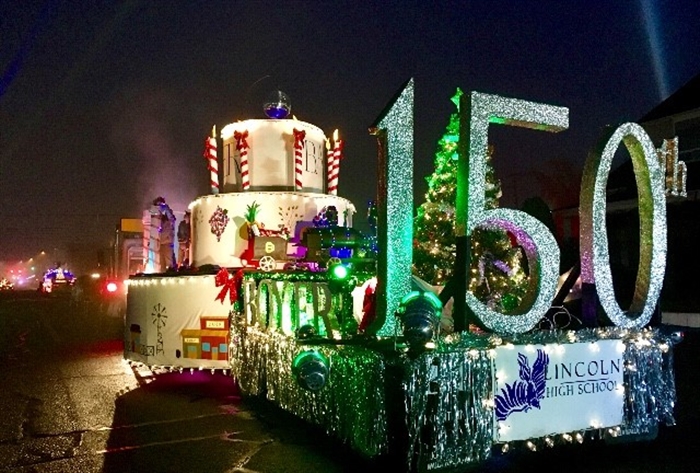 In addition to the massive float, over 150 Baker Boyer employees, retirees, and family members joined in the summer parade as a demonstration of the Bank’s long tradition of investing and volunteering to make our community a great place to live, work, and play.

“We are so proud and appreciative of the creativity and hard work from the Lincoln High students, staff, and volunteers,” explained Jim Wilson, Marketing Director. “This float was a wonderful way to celebrate Baker Boyer’s 150th Anniversary with the families and businesses of the Walla Walla Valley.”

As an expression of gratitude for the time and talent invested by Lincoln High students and staff, Baker Boyer donated $2,000 to the school: $1000 to replace tools that were stolen during the project, and $1000 unrestricted for Lincoln programs.

Check out this video made by Tangent Media Group on Baker Boyer and Lincoln's float partnership!

ABOUT LINCOLN HIGH SCHOOL: Lincoln High School has a rich history. Originally built in 1888 as the Paine School, it was renamed Lincoln High School in 1902. In 1927 the building was torn down, and a new building was built on the same site and it took the Paine name. Eight years ago, the school returned to the name Lincoln as part of a shift to provide its students with a new culture and educational opportunities with a strong core academic program with electives that meet the individual needs of its students. Past Lincoln floats have included: Alice in Wonderland, Star Wars, The Grinch, Nightmare Before Christmas, Charlie Brown Christmas, The Muppets, Island of Misfit Toys. Lincoln has received 4 “Best in Show” awards and 5 “Best High School Float” awards at the Macy's Parade of Lights. More information at www.wallawallalincolnhs.org

ABOUT the 21st CENTURY COMMUNITY LEARNING CENTER: 21st CCLC programs support the creation of community learning centers that provide academic enrichment opportunities during non-school hours for children, particularly students who attend high-poverty and low-performing schools. These programs help students meet state and local standards in core academic subjects, such as reading and math; offer students a broad array of enrichment activities that can complement their regular academic programs; and provide literacy and other educational services to the families of participating children. More information at www.wwps.org/programs/21st-cclc